The 2013 Easter Event was the first holiday event of Old School RuneScape, and started on the 26th of March. It is identical to the Easter event that occurred in 2007 in RuneScape 2.

The holiday event can be started by talking to the Easter Bunny south of Falador.

When you have 10 of them, make your way to the kebbit chute and rabbit-imprinted door, north of the entrance to the caves. 'Use' the 10 kebbits on the chute, go through the door and ready yourself for a new task.

You will find yourself in a room with a large pen full of chocolate kebbits in the center. You need to grab some easter eggs, in which there are piles of them around the pen, and use them as bowling balls to crush the kebbits. Head to one of the four openings, grab some easter eggs, and get bowling. Once you have hit ten kebbits, run in and pick up the chocolate chunks left over. Go back, and climb out to the surface the way you came in. Give the Easter Bunny the chunks to finish the first task and you will receive the chicken feet and legs.

The bunny wants you to do a final task: obtain a rabbit mould.

The Easter Bunny will give you a magic egg. Climb down again, and find the rabbit hole. You must stand beside the small hole and eat the magic egg, which will cause you to transform into a small rabbit, and will remain as one until you leave the cavern the hole contained.

This seems to be an enclosed farm. Dig one of the patches, and you will come out on seemingly the same farm, in the same hole, but with a farmer, Nigel, patrolling around. If he sees you, he will hit you on the head with his shovel, and you will go back to the original farm. 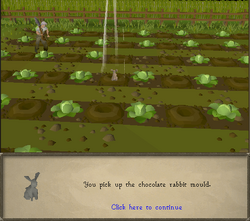 When you are on Nigel's farm, look for the mould. When you see it, and are back to the original farm, try to go to the same spot as the mould, and dig. This may take a few tries. When you get to the right spot, you will automatically pick it up. Nigel will hit you on the head again, and you're back in the Easter Bunny farm! Exit the way you came, and you will transform back into a human again.

Talk to the Easter Bunny again. He will thank you, and promise not to mess up next year. Then, he will give you the rest of your reward - the rest of the chicken set!

The reward is the full chicken set:

When wearing the full set, you can do the improved Flap emote (if you have unlocked it first from the Stronghold of Security). Your character will rise up into the air, come down and look at its wings.

Also, you get the Rabbit Hop emote.

Retrieved from "https://oldschoolrunescape.fandom.com/wiki/2013_Easter_event?oldid=8691775"
Community content is available under CC-BY-SA unless otherwise noted.