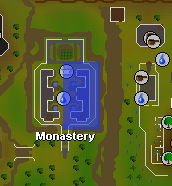 Abbot Langley is an NPC monk who guards the entrance to the Edgeville Monastery. He prevents players with less than 31 Prayer from entering the guild. (This cannot be boosted in any way possible above your current level. Ex. spicy stew to reach 31/26 prayer) He can restore some of the player's hitpoints if they are injured. He can also attach a Sigil to a blessed spirit shield for a fee of 1,500,000 coins.

Players can speak to him with a soft clay, leather boots, and a bowl of hot water to receive a corrupted helm.

He is part of two Cryptic clues:

Retrieved from "https://oldschoolrunescape.fandom.com/wiki/Abbot_Langley?oldid=8689968"
Community content is available under CC-BY-SA unless otherwise noted.