View source
RS
This article is about the normal version. For the ensouled version, see Ensouled abyssal head.

I should get it stuffed! 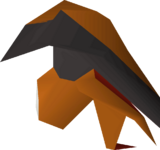 An abyssal head is a very rare drop from Abyssal demons and their superior counterpart, which require 85 Slayer to kill. Players may also obtain an abyssal head by placing an unsired at the Font of Consumption; this has a 5/64 chance, and as an unsired is a 1/100 drop, this effectively makes it a 1/1,280 drop.

It can also be stuffed and then mounted in player-owned houses in the Skill Hall at level 58 Construction, but it is a one time use and it cannot be reclaimed.