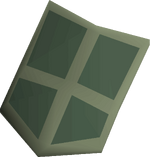 They are obtained via completion of level 3 clue scrolls, and therefore are much more rare and expensive than normal adamant kiteshields.

Retrieved from "https://oldschoolrunescape.fandom.com/wiki/Adamant_kiteshield_(t)?oldid=8688356"
Community content is available under CC-BY-SA unless otherwise noted.