A mysterious power emanates from the talisman... 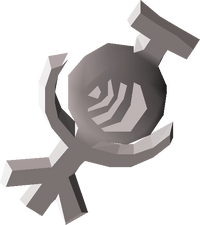 The Air talisman is an item that allows players to enter the Air altar. At the altar, the player can use the Runecrafting skill to turn Rune essence or Pure essence into Air runes.

Also at the air altar, an air talisman can be combined with a silver tiara to make an air tiara for 25 Runecrafting experience, by using the tiara on the altar while having an air talisman in inventory. This consumes the talisman, but the air tiara can be used the same as an air talisman and can be worn, opening an inventory slot to carry another essence.

Air talismans can be used to create combination runes. The talisman is consumed when used as the 'secondary' talisman to make these runes.

Air talismans can be obtained as a reward from the Rune Mysteries or as drops from various monsters. The lowest leveled monster to drop them are level 2 Goblins, but they are not a frequent drop. The level 13 Air Wizard located south of Falador occasionally drops air talismans. Level 86 Abyssal leeches often drop talismans, including air talismans, but the leeches are in members' areas and the areas are dangerous for lower-leveled players.

Retrieved from "https://oldschoolrunescape.fandom.com/wiki/Air_talisman?oldid=121820"
Community content is available under CC-BY-SA unless otherwise noted.