A hauntingly beautiful amulet bearing the shape of a skull.
Loading...

The amulet of avarice is an amulet that can be received as a drop from revenants found within the Revenant Caves. The amulet shares the same bonuses with the amulet of glory.

When attempting to equip the amulet, players will be given a warning in which equipping the amulet will result in having a skull applied to the player.

The skull will be permanently applied until it is unequipped, in which the skull will disappear after twenty minutes. In exchange, all items received from NPCs within the Revenant Caves will be in the form of bank notes. 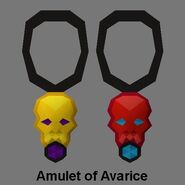 The initial designs of the amulet of avarice by Mod West.