A dragonstone amulet with an unlimited supply of magic charges.
Loading... 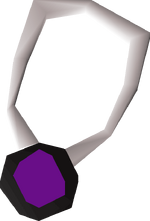 The amulet of eternal glory is a special dragonstone amulet that possesses the same stats and features as a regular amulet of glory, but with unlimited teleport charges rather than the amulet of glory's four or six charges. It can teleport the player to the following locations:

It is obtainable at a rate of 1 in 25,000 by charging amulets of glory (including the trimmed variant) at the Fountain of Rune, east of the Demonic Ruins in the Wilderness. When this occurs, a message in the chatbox will appear, stating: "The power of the fountain is transferred into an amulet of eternal glory. It will now have unlimited charges."