Half a page of notes. 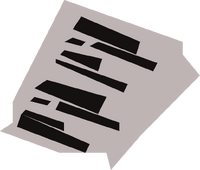 The ancient note can be found by inserting 100 numulites into one of the stone chests inside the House on the Hill on Fossil Island. There is a chance nothing will happen or a spike shooting out and stabbing the player for 9 damage, wasting the numulites.

This note can be added into the fossil island note book.

I have been impressed how quickly my creatures have evolved, the others will have to listen now! Again, the similarities to the garic are so frequent, there must be an academic explanation. Several have formed territories based on the spore colonies that inhabit them, and the mutations are consistent based on geography. Much like ourselves, it was only a matter of time before a divide formed.

Retrieved from "https://oldschoolrunescape.fandom.com/wiki/Ancient_note?oldid=8079772"
Community content is available under CC-BY-SA unless otherwise noted.