A very old symbol of Saradomin. 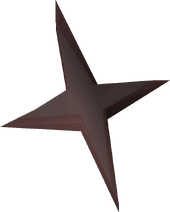 The ancient symbol is an old symbol of Saradomin. Players may find this whilst working in the excavational area of the Varrock Museum by cleaning uncleaned finds.

The ancient symbol looks like an eroded holy symbol without the string. Players cannot string this symbol with a ball of wool, and it has no use except as part of the miniquest.

Players should place it in display case 37 (ground1st floor[?]). Its information reads: "This small symbol was used as a decoration on the Saradominist altars throughout the city. Two or three examples have been found, but this is the best. Worked in blue-enamelled iron, it has not survived the ages well. We believe this to be from the early years when the city was still being built."

Because it is a symbol to Saradomin, it is believed to be from the ruins of Saranthium as opposed to Senntisten, which was an earlier settlement on the same location and of Zarosian religion.

Retrieved from "https://oldschoolrunescape.fandom.com/wiki/Ancient_symbol?oldid=8079792"
Community content is available under CC-BY-SA unless otherwise noted.