A mysterious artifact of ancient times, of reasonable value to emblem traders.
Loading... 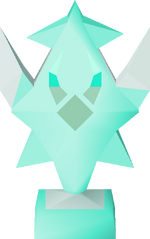 The ancient totem is a drop obtained from revenants found in the Revenant Caves.

It can be given to the Emblem Trader wandering around in the Revenant Caves in exchange for 1,000,000 coins. This must be done while on the official Bounty Hunter world. The totem cannot be given to him in Edgeville.

Much like the bracelet of ethereum, the totem is always lost on death, even if it is the only item in the player's inventory.

Retrieved from "https://oldschoolrunescape.fandom.com/wiki/Ancient_totem?oldid=8079795"
Community content is available under CC-BY-SA unless otherwise noted.