Note: Dorgesh-Kaan can be reached either via Kazgar from the Lumbridge cellar or via Dartog from the water mill by telling either NPC to take the player to the mines. Afterwards, go south past the sword icon and enter the door.

Speak to Ur-tag or Ambassador Alvijar. They can be found in the northern part of the city, up the stairs, then east to house with quest start icon. They will explain they are making a train route between Keldagrim and Dorgesh-Kaan. Go southwest of the city (without going down the first staircase) until you find a transportation sign (on your minimap). Go through the doorway, and you will end up in a train station.

Walk south on the tracks and talk to Tegdak; he will give you a trowel and a specimen brush. Dig up the artefacts hidden on the unfinished railway tracks by using the trowel on them (They look similar to the other rocks on that surface but they are bigger than others so it's quite easy to recognise). Clean all six artefacts by using an artefact on the specimen table - you will then end up with an armour shard, an axe head, a helmet fragment, an ancient mace (shows as a "mace" for now), a shield fragment, and a sword fragment. After cleaning them, talk to Tegdak.

Note: The trowel and specimen brush are no longer needed and can be dropped after talking to Tegdak.

Before continuing, it's recommended that you bank and equip gear to fight with ranged or magic (knives and darts will not work unless you can use longrange). You won't get a chance to bank before the upcoming fight.

You must dismiss your follower before taking Zanik with you!

Now, take Zanik with you, and go visit the goblin scribe west of Ur-tag's house. Talk to him about the symbols that are covering the mace that you found. The scribe will not be able to tell you anything about the symbols, but he suggests that you go talk to the goblin generals in Goblin Village.

Note: Don't teleport to Falador, or Zanik will be left behind, go talk to Oldak downstairs in the northwestern part of the city instead.

Go down the stairs in the house just west of the scribe and talk to Oldak. He will teleport you to the Goblin Village and give you a sphere to teleport back to the city.

Once you're in the village, talk to one of the generals, and a cutscene will begin, and in the end, you discover that Zanik is most likely the goblins' 'chosen one' to lead them. The mace is also found to have the power of the goblin god, Bandos.

At the end of the cutscene, two H.A.M. Members show up and start attacking the goblins with Ranged and Magic. Take the path around the back (west side) of the buildings, but stay out of the attack range. When you get to the tower, climb up the ladder and kill the H.A.M. Mage and H.A.M. Archer with either Magic or Ranged. A bronze crossbow and 50 bronze bolts spawn upstairs next to the ladder if you need a weapon. They do not respawn if you run out of ammo.

You can simply fight the two foes, or you can also take cover behind the box so you won't take damage. When you're prepared, come out from behind the crates and attack the H.A.M. If things get too hot, or you need a break, click "hide behind crate" again in order to stop the damage. The mage and ranger will hit at the same time, and never miss, so using protection prayers can only reduce damage. It is possible to avoid all damage by hiding behind crates, click one enemy, and then immediately after hide behind crates. Using a crossbow on rapid-fire allows the player to fire a bolt and hide behind the crates before the enemy's projectile hits. In order to use darts, the player must use the Long Range combat style.

Note: Leaving the Goblin Village will cause you to be returned to the Ambush instance when you return.
Warning: If you die here you will lose your items. They will not be there when you return. Use the boxes as cover if you have to.

When you have done this, there will be another short cutscene where Zanik is kidnapped by Sigmund. The goblin generals will tell you they are sending two sergeants to help you and that you should meet them at Lumbridge Swamp. They will also give you the ancient goblin mace.

Getting past the guards

Sigmund plans to kill her on the train tracks between Keldagrim and Dorgesh-Kaan, making it look like an accident so that war will break out between the dwarves and the goblins. You cannot enter through the Dorgesh-Kaan entrance this time (it will say the staircase is closed), so you must go to the Lumbridge swamp cave entrance and meet the goblin warriors who will be helping you.

Climb down the entrance to the caves and next to the rope should be another ladder. Go down it, and you will briefly see a H.A.M. Guard before he runs away to get reinforcements. Now, talk to the goblins. Tell one to wait behind, and run down the hallway going into the room off to the east side, hiding while the guards run past. Go down by the boxes, and get one more guard to come out. Tell the second goblin to wait there, and go back to the room. Then, go past them towards the ladder, but run back when the final guard starts coming, and make sure he sees the goblin. Another method is to hide in the closet while the first two guards pass. Then walk out and hide behind boxes, and while another guard comes walk toward the final guard, and he will head toward the goblins, and you are now safe. During this entire part in the tunnel make sure you aren't seen by any guards that are not attacking a goblin or you will be sent back to the swamp and have to start this section over again. Alternatively, try luring the guards over to the goblins. Eventually, make your way all the way down the hallway, avoiding the guards, to the ladder at the other end. Ensure all of the guards see the goblins, and then walk past them, and go down the ladder.

Warning: If you die in this room you will lose your items. They will not be there when you return. If need be, a new ancient mace can be obtained by the generals in the Goblin Village for 1000gp. Also, if you use the mace's special attack too quickly after the fight starts there is a possibility that it will not work and the prayer-draining effect will not appear.

At the bottom you find Sigmund (level 64). Use any method of attack, and he will set his Prayer on (according to your choice of attack). AFTER he activates his prayer, wield the ancient mace and use its special attack to drain his prayer. After that, resume the fight. Now, he will get hit, but he also seems to have a high Defence. Low levels be warned. If you attempt to untie Zanik whilst the fight is in progress, you will be hit for around 10 Hitpoints of damage.

When he is defeated, he will teleport away. Untie Zanik, and get ready to watch the final cutscene about the grand opening of the Dorgesh-Kaan - Keldagrim Train System. 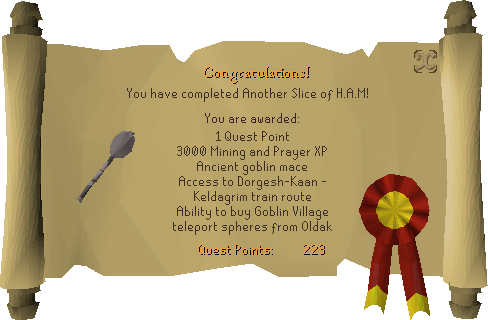 The completion of Another Slice of H.A.M is required for the following: