The antithesis of the holiday spirit. In his boxers.
Please add a map!

The Anti-Santa is an individual who seeks to eradicate the spirit of self-deception that is embodied by his opposite, Santa Claus. He views Christmas as a false reality that mortals use to conceal and block out the fear and pain of everyday life, and believes that by letting mortals perceiving life as it is, they will be able to find the will-power to change the world.

During the 2013 Christmas event, he appeared when Jagex announces his appearance in the Wilderness via their Twitch channel and Twitter. He had a chance to drop Christmas crackers and Santa hats.

He could be found in Prifddinas during Old School RuneScape's first anniversary.

During the 2014 Christmas event, he appears outside the Falador Party Room and requests aid from players in order to spread despair in the form of coal, which he states cannot be used for smelting, and exists solely to waste a player's bank space. Players who give him a full box each day will receive the following pieces of the Antisanta outfit in order: jacket, gloves, pantaloons, boots, and mask. Once players have obtained the full outfit, he would give players two noted christmas crackers for each full box given to him.

He is mentioned during the 2015 Easter event, where he summoned a chocolate demon to sabotage Easter. After the demon's defeat, he decides to visit his friend, the Grim Reaper, who takes him into his mansion to stay, pitying him.

Despite their centuries-old friendship, Grim decides that after staying in his mansion for months, sitting on his sofa in his underwear and leaving his laundry on the floor, and constant ramblings about his conspiracy theories, that he needs to be evicted and asks the player for help to do so during the 2015 Hallowe'en event, as his Halloween party is approaching and influential figures are attending. He is lured outside the mansion after heating up the house and stewing some trapped souls in a cauldron.

In Evil Bob's random event with Prison Pete, Anti-Santa is visible from the corner of ScapeRune outside the Party Room.

Anti-santa's original model, which has since been replaced.

Anti-Santa in his new home. More so a prison in the dimension of ScapeRune as to keep him from ruining yet another holiday.
Add a photo to this gallery 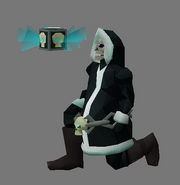 Retrieved from "https://oldschoolrunescape.fandom.com/wiki/Anti-Santa?oldid=9049230"
Community content is available under CC-BY-SA unless otherwise noted.