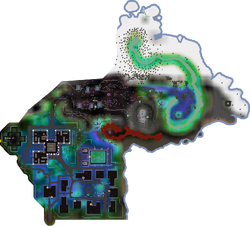 The Arceuus House (pronounced "Arr-KAY-us") in

Dark Altar, a mysterious altar whose powers extend to life and death, expanding their

producing runes for the region.

fairy ring that can be reanimated by paying

Trossa, located north of the

Arceuus House Library, a one-time payment of 80,000 coins. The code, CIS, can only be used after Trossa reanimates the fairy ring.

A majority of those who reside in the Arceuus House are former humans who, through the power of the Dark Altar, are able to achieve immortality by moving their soul from their mortal body into an incorporeal one. Their souls are freed from the mortal bodies in the crypt below the church, and take on the incorporeal form commonly seen among Arceuus House residents.

The art of runecrafting has been known by the Arceuus House since 150 years before the wave of visitors from the mainland arrived. However, they were unable to create

law runes, explaining the lack of teleportation spells around

However, a book titled

Transvergence Theory documents the differences between runecrafting in the mainland and runecrafting in Zeah. While the mainland uses talismans to teleport individuals to another dimension, runecrafters in Zeah use energy that emanates from the ground near the Dark Altar to change the essence.

The Arceuus House is closest to the northern reaches of Zeah, and is the first line of defence against the

Wintertodt, a mysterious entity that brings along with it extremely harsh cold.

There are several methods of travel:

WARNING: If you already have 100% favour in another House, ensure you have spoken to the respective House's

Architect to lock in the favour. To do this you must have started the

Architectural Alliance miniquest by speaking to

Hosa. Otherwise gaining favour in another House before speaking to them will make you lose favour in that house!

The Arceuus House's architect is

Arcis, who is found east of the bank.

Earning the favour of the Arceuus can be done by assisting the Arceuus Elders with expanding their knowledge, seeking your own dark knowledge, mining

Dense essence block and using the

Arceuus spellbook. Once earning 100% favour of the Arceuus house, players are able to runecraft

soul runes at their respective

altars if players have level 77 and 90

Logosia, customers in the library are having trouble finding the texts they seek. Players can speak to

Villia to search bookcases for books or scrolls around the library for them. To help narrow down where to search, talk to

Note that if a player is required to find either of the books Transportation Incantations or Soul journey, it is recommended to read them, as doing so will unlock the

Teleport to Kourend spell and the

Once the text is found and returned to the respective NPC, players are rewarded with a

book of arcane knowledge and 2.5% favour. Speak to another NPC looking for assistance, as the NPC you already helped will be busy reading the book/scroll you gave them.

Once players reach 20% favour, they can speak to

Horphis, an Arceuus House wizard, who will ask players to collect

dark manuscripts found within the library. Players can again speak to

Biblia to narrow down the location of the dark manuscripts and the books.

Multiple manuscripts can be obtained without consistently returning to Horphis. Each manuscript given rewards a

book of arcane knowledge and 5% favour.

Once players reach 25% favour, they will be able to mine

dense essence blocks within the

dense runestone mine, located east of the

Dark Altar. Make sure you bring a

chisel as well as a pickaxe and have level 38 in crafting and mining.

Players can turn in dense essence blocks to

Clerris, rewarding 0.1% favour for every block handed in.

The library is managed by the chief librarian,

Logosia. The library can be used to help assist customers find books and/or scrolls in order to gain Arceuus favour.

The dense runestone mine is usable after gaining 25% Arceuus favour. Players are able to mine

dense essence blocks, which are used in Runecrafting. Players require a pickaxe and a chisel in order to mine the rock. 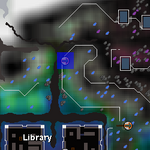 Great Kourend. Players must pay a one-off fee 80,000 coins to

Trossa in order to use it.

dark essence blocks, which are then crushed into

dark essence fragments for use with the blood and soul altars. (requires 100% favour to make dark essence)

vials of water and

wizard hats. He is also one of the few non-player characters to sell

soul runes, the other being

Baba Yaga and from the

The Tower of Magic is currently inaccessible and players are forbidden to enter. A

Tower Mage tells the player that "Lord Arceuus does not wish his experiments to be disturbed."

The church in Arceuus.

The Dense runestone mine.