25% Arceuus favour to use 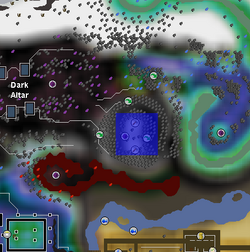 The Arceuus essence mine is located within the Great Kourend's Arceuus House in Zeah. The mine contains two dense runestones, where players can mine dense essence blocks, which are then used on the Dark Altar to create dark essence blocks. It is not possible to get a rock golem pet from mining here.

You can donate dense essence blocks to Clerris in return for favour in Arceuus House.

In order to use this mine, players require at least 25% favour towards Arceuus in addition to 38 Mining and 38 Crafting. A pickaxe and chisel in the player's inventory is required to mine the dense runestone, granting 12 Mining and 8 Crafting experience per block mined.

In order to use the shortcuts, you need to have 73 Agility for the western rock scramble, 69 for the northern scramble and 52 for the eastern scramble.