Architectural Alliance is the first miniquest exclusive to Old School RuneScape, which was introduced in the March 3, 2016 update. It features Great Kourend, a kingdom in Zeah that is divided between five houses: Hosidius, Shayzien, Arceuus, Lovakengj, and Piscarilius. The statue of King Rada I, which stood in the city's centre, was destroyed by a devastating storm. The player must unite the Houses of Great Kourend to rebuild the statue of their King.

Before beginning the miniquest, it is recommended that players complete the Client of Kourend quest. Completing it will give players a Kourend favour certificate, which gives players a head start by granting 20% favour in a House of the player's choosing.

A player must speak with Hosa by the statue of King Rada I in Great Kourend to start the miniquest. Hosa, the Hosidius architect, explains that he wishes to rebuild the statue of King Rada I in the centre of Great Kourend after it was heavily damaged in a storm. However, he is unable to receive the assistance of the other architects in their respective Houses, and requests that you do so for him.

Note: Hosa's current verbiage is not as clear as the other architects when you speak to him once attaining 100% favour; regardless, favour will not be "locked" after speaking to him at 100%, you must speak to the specific Architect in the respectable House. His location does not change.

The location of the architects are as follows: 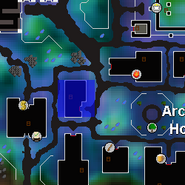 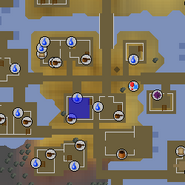 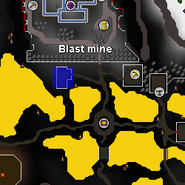 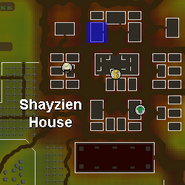 Hosa, the Hosidius House architect
Add a photo to this gallery

Before beginning the miniquest, it is recommended that players complete the Client of Kourend quest. Completing it will give players a Kourend favour certificate, which gives players a head start by granting 20% favour in a House of the player's choosing.

If you have not completed any Kourend quest, nor gained any favour yet, the following order can be used to gain 100% favour in all houses within around 7 hours. Note that this may not be the fastest or most efficient order. You can read the full guides for further information. This method also takes useful unlocks such as the Teleport to Kourend spell and various other transportation methods on the continent of Zeah into account.

Earning the favour of the Piscarilius can be done by assisting the Piscarilius Elders with repairing the fishing nets, taking fish to the market, hunting grubs on the beach and stealing booty from houses.

Earning favour with the Lovakengj requires you to assist in the collecting of resources for dynamite and the creation of armour.

Earning favour with the house will allow you access to a training ground found verging on the bloodlands, a desolate area that holds nothing but the mutated remnants of war. You will also be able to police the city to help keep order. Players with 5% Shayzien favour are able to fight lizardmen. Players will also be able to win tiers 1-5 Shayzien armour through the combat ring as the player earns more favour.

Earning the favour of the Hosidius can be done by helping with the production of farmed foods and preparing food for soldiers. Once you have earned the Favour of the Hosidius house you will gain access to both the city kitchens, which boasts a 5% reduced chance of burning when cooking using their ranges, access to a new Spirit tree patch and the ability to play the Tithe farm minigame, which focuses on gaining farming experience, full protection from disease for the allotment patch (herbs and flower patch are covered as well), and access to the Woodcutting Guild.

The statue before being rebuilt.

The player thanks the architects for lending their assistance.

The rebuilt statue of King Rada I.
Add a photo to this gallery

Congratulations, miniquest complete! Players will now unlock the Xeric's Heart teleport on Xeric's talisman, which teleports players to the statue.

Retrieved from "https://oldschoolrunescape.fandom.com/wiki/Architectural_Alliance?oldid=8694083"
Community content is available under CC-BY-SA unless otherwise noted.