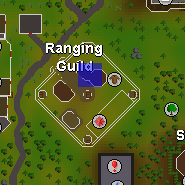 Like Vannaka, he wields a two hand weapon and a shield at the same time. In this case, his choice of a two handed weapon was a longbow and also a steel kiteshield at the same time. You can find him in Hemenster in the Ranging Guild selling most types of ranger armour such as leather body, hard leather body, studded body, chaps, studded chaps, cowl, coif, and leather vambraces.