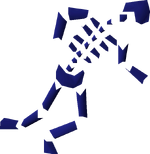 Asyn remains are an item found and used in the Shades of Mort'ton minigame. To obtain these remains, the player must kill an Asyn shade, located in the underground tomb. To enter the tomb, the player needs at least a bronze shade key, obtainable by killing and cremating a Loar shade. They may also be encountered while Temple Trekking. To burn the Asyn remains, the player needs some pyre logs (see table for more info), 65 level in firemaking and a tinderbox. First place the pyre logs on a funeral pyre, followed by the Asyn remains, then ignite the pyre. This will grant the player Firemaking experience (see table), and 82.5 Prayer experience.

Once burned a black or silver shade key, or 800-900 coins, will appear next to the pyre. The keys can be used to either enter the tomb, or open the corresponding coloured doors to chests containing valuable items.

Players may only use Yew pyre logs or better to burn Asyn remains.

Retrieved from "https://oldschoolrunescape.fandom.com/wiki/Asyn_remains?oldid=8213672"
Community content is available under CC-BY-SA unless otherwise noted.