Master of the Runecrafting skill.

Runes are his passion. 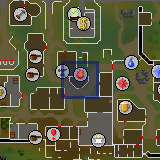 Aubury is the owner of the Aubury's Rune Shop in Varrock. He features heavily in the Rune Mysteries quest. He stocks many free-to-play runes, including chaos and death runes. Players who have completed Rune Mysteries can also ask him to be teleported to the rune essence mines. When he teleports players, he utters "Senventior Disthine Molenko!".

He is a close associate with the Head Wizard Sedridor of the Wizards' Tower, it was Aubury who researched the secrets of Runecrafting so extensively he discovered the teleportation spell to the mine, and is capable of wielding magic for certain spells, such as Tele-othering players to magically closed mines in the northern ice fields, as well as, through the use of "a couple of runes", instantly teleport others just outside of the Wizards' Tower, saying the spell, Sparanti morudo calmentor!, but only once in the Rune Mysteries quest.

Because of his proximity to the east Varrock bank, Aubury is the favourite location for players to mine rune essence short of the Wizards' Guild. He also sells the Runecrafting Cape of Achievement for 99,000 coins to players who have gained level 99 Runecrafting.

During the Rogue Trader minigame, players will ask Aubury to supply Ali Morrisane with runes, and Aubury will agree. After the completion of Rogue Trader, players might get cheaper runes from Ali Morrisane, provided they are able to solve a puzzle.