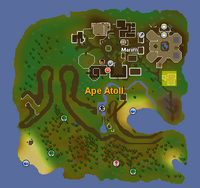 King Awowogei is the powerful monkey king and monarch of Ape Atoll.

His palace is located south of the Temple of Marimbo which is in east Marim, the monkey capital. King Awowogei has ape guards blocking the entrance; to get through, talk to the south ape and he will move out of your way. As with the monkeys on Ape Atoll, he is a devoted follower of Marimbo.

In Monkey Madness I, a Karamjan monkey emissary (the player) meets him. While he has heard that Karamjan monkeys are inferior to them (since they have no societal structure), he is aware of their resourcefulness. He asks the player to rescue another of its kind from the Ardougne Zoo before considering. When the player returns with the monkey, he allows them to stay as long as they want, while he considers the alliance.

Later on, it is shown that he is secretly working with Glough, who sent him a Jungle Demon to dispose of the 10th squad.

In Monkey Madness II, he plans another invasion alongside Glough's invasion. He is concerned with Kruk, as Kruk has been consistently late for the recent war meetings. The player finds Kruk in his dungeon, kills him, and uses Zooknock's powers to masquerade as Kruk. Awowogei reveals that he has recruited the trolls of Trollheim and ogres of Gu'Tanoth to a separate invasion, a new war fleet, and Kruk's secret weapon. The player defeats the champions, destroys the war fleet, and foils the "secret" weapon. When Awowogei hears of this, he dismisses Kruk for his failures and eventually decides on placing Duke as the head of the ninja monkey guards.

At the end of the quest, he negotiates peace with King Narnode, stating that Glough would have sent the "two races into their deaths". It is presumed that Awowogei found out what the "secret" weapon was, and was horrified by what Glough had planned to do with his people. He opens the gates of Ape Atoll to all visitors as a result of this new peace treaty.

Awowogei is part of the Lumbridge Secret Council. During the banquet, he is frozen by the Culinaromancer, but Gypsy Aris saves everyone in time. The player speaks with Awowogei in Ape Atoll in an attempt to find out what his favorite food is, but he refuses to reveal it. The player eventually finds out through the three monkeys he mentions that his favorite food is the stuffed snake. When given to free him from the Cuilnaromancer's grasp, Awowogei remarks about the tasteful flavors of the snake, and teaches the player the Teleport to Ape Atoll spell.

King Awowogei is the solution to the hard anagram clue: WOO AN EGG KIWI, with a challenge scroll answer of 24. Those seeking King Awowogei for the anagram clue directed by Hard Clue Scrolls should remember to bring a Karamjan Monkey Greegree and a Monkeyspeak amulet to access his building.

Retrieved from "https://oldschoolrunescape.fandom.com/wiki/Awowogei?oldid=8690322"
Community content is available under CC-BY-SA unless otherwise noted.