An old woman who lives in a very strange house. 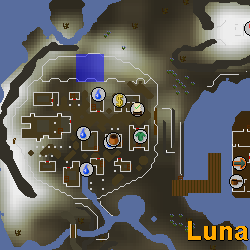 Baba Yaga is a member of the Moon Clan on Lunar Isle who lives in a house named Berty. She is admittedly insane and runs Baba Yaga's Magic Shop, which sells runes, battlestaves, and Moonclan manuals.

Players who have completed Lunar Diplomacy and have level 71 Magic can talk to Baba Yaga on Lunar Isle to unlock the Ourania teleport spell. The Lunar spellbook must be equipped before you speak to her in order to unlock the teleport.

Retrieved from "https://oldschoolrunescape.fandom.com/wiki/Baba_Yaga?oldid=9049078"
Community content is available under CC-BY-SA unless otherwise noted.