So where are the butcher and the candlestickmaker? 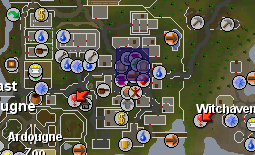 Bakers are NPCs who run bakery stalls in the East Ardougne market as well as in the Great Kourend market. Players can steal cakes, bread, and chocolate cake slices from their stalls. However, doing so attracts the attention of nearby guards, who will attack the player. If a player attempts to steal from the stall while in the bakers' view, that player will be unsuccessful. The Ardougne baker has a daughter named Ramara du Croissant.

Bakers also sell all the items that can be stolen from their stalls. However, if a player attempts to trade or talk with the bakers having stolen from their stalls within the previous 15 minutes, the bakers will not only refuse to trade or talk with the player; they will alert the guards. If players steal from one baker and then go to the other, they still call the guards.

Retrieved from "https://oldschoolrunescape.fandom.com/wiki/Baker?oldid=8693018"
Community content is available under CC-BY-SA unless otherwise noted.