RSCRS
This article is about a mine in the Wilderness. For the mine in the Kharidian Desert, see Bandit Camp Quarry. 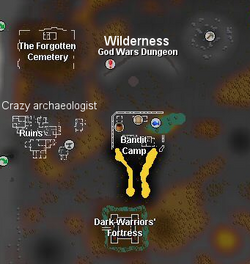 This site is also a nice spot to train Smithing in the Wilderness, as it has a furnace east of it, and an anvil south-west of it.

Most of the time, the miners will be attacked by the hobgoblins. Since the mine is higher than level 20 Wilderness, players wearing an amulet of glory can move a bit south, and teleport while in level 30 Wilderness; however, the amulet is for members only.

The Hobgoblin Mine features one of the most abundant supplies of mithril and adamantite ore in a single location in the entire game, along with one of the mining locations unlocked in the Haunted Mine quest, which is closer to a bank. Coal and iron rocks are also scattered around the area.

In total, the mine contains:

The Superheat Item spell can be used well there. To use the mine well, it is recommended to bring many nature runes, wield a Staff of fire and bring a Rune or Dragon pickaxe along with several pieces of high quality food. Possessing good Melee abilities is strongly recommended, and as it is faster to mine coal and mithril in the Dwarven Mine, it is also better to mine solely adamant ores. A set of inexpensive armour can also help to fend off hobgoblins. Bear in mind dying in the Wilderness, you will retain no items if skulled, three (3) items normally or four (4) items with Protect Item. As hobgoblins would be a threat too, it is recommended to team in 2-5 to protect each other.

The Explorer's ring is somewhat useful here. At its highest level, the ring boasts the ability to High/Low Alch just over a full inventory of bars and ores when desired without nature or fire runes, restore run energy up to three times (greatly helpful when escaping PKers), and teleport to a safe location below level 20 Wilderness.

Retrieved from "https://oldschoolrunescape.fandom.com/wiki/Bandit_Camp_mine?oldid=8692383"
Community content is available under CC-BY-SA unless otherwise noted.