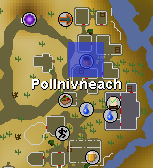 The Banknote Exchange Merchant is an NPC located next to the Pollnivneach General Store in Pollnivneach who will un-note items for five coins per item. Unlike the other banknote exchange merchants, he does not have a unique name.

These NPCs would be intended for the use of Ultimate Ironmen, though other players could also use them to un-note items without risk of anyone taking them. NPCs would be added to the general stores in Rimmington, Pollnivneach, the Bandit camp and Jiminua's store on Karamja.

Retrieved from "https://oldschoolrunescape.fandom.com/wiki/Banknote_Exchange_Merchant?oldid=8691448"
Community content is available under CC-BY-SA unless otherwise noted.