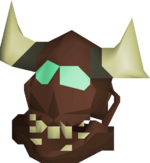 Bear your Soul is the second miniquest exclusive to Old School RuneScape, which was introduced in the May 19, 2016 update. It involves the player searching for a damaged ancient artefact that is mentioned in a book.

During the miniquest, players will require a spade and a method to reach Cerberus' Lair within the Taverley Dungeon. Players thus need a dusty key if they do not have at least level 70 in Agility. Alternatively, players who have Key master teleports can teleport directly to Cerberus' Lair.

The player must begin the miniquest by making the trip to the Arceuus House Library, which can be reached by walking west from the ship the player arrives from in the Piscarilius House, then north-west once the player reaches the Arceuus House. Alternatively, those who have paid Trossa 80,000 coins can use the fairy ring code CIS and walk southward.

Once in the Library, players must search for a book titled The Journey of Souls, by Aretha. Players may be asked to find this book by other NPCs (Sam, Professor Gracklebone, and Villia), which will allow players to ask Biblia on the top floor to narrow-down its location.

Once the book is obtained, read through it (or just close it immediately after clicking Read). After reading the book, the chatbox will state The book referred to an artefact being buried in Kourend, but the author did not specify where it was buried. Maybe you could persuade her to change her mind.

The author is Aretha, who can be found by the Soul altar in the northern part of the Arceuus House. Walk north from the Library, then slight northeast past the Dark Altar and following the green-bluish road that ends at the soul altar.

Speak to her and select the option "I've been reading your book...", and she will eventually mention the Key Master, who may have the knowledge to repair the artefact, the Soul Bearer. She will further state the Soul Bearer is buried in the crypt in the Arceuus House's church.

The church is located East of the Library, the area with blue around the edges and green in the middle, on the minimap. Once you have reached the church climb up the stairs, then climb down the stairs that follow. Dig anywhere with a spade to obtain a damaged soul bearer.

Head to the Key Master, who is found in Cerberus' Lair within the Taverley Dungeon. Players will need a dusty key if they do not have at least level 70 in Agility to use the shortcut. Alternatively, players who have Key master teleports can teleport directly to him.

Speak to him and he will repair it into a usable soul bearer. If the player loses it, they can receive another from digging in the crypt in the Arceuus House's church. Congratulations, miniquest complete!