A magical talisman in the shape of a bearded gorilla head. 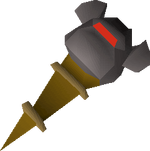 A bearded gorilla greegree allows a player to turn into a gorilla while on Ape Atoll. While in this form, a player, using a rope, can pick red bananas needed in Recipe for Disaster. To make a gorilla greegree, a player must take monkey bones from a Monkey Guard and a Monkey Talisman to Zooknock.

Gorilla greegree's are made by taking a monkey talisman and the monkey bones of a level 167 bearded monkey guard to Zooknock.