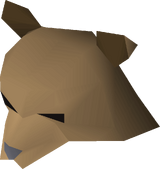 A Bearhead is a piece of low level headgear that is obtained after killing The Kendal in the Mountain Daughter quest.

This helmet is popular amongst 1 Defence pures as it has amongst the highest stats for a helmet that requires level 1 Defence, with defensive bonuses comparable to a Black full helm. It is also popular among Abyss runecrafters as it has low weight. Of particular note is its relatively high Magic defence. With a bonus of +7, its Magic defence is superior to every other piece of headgear in the game aside from the 3rd age mage hat, the Armadyl helmet, the Healer hat, the Slayer helmet (i), and the halos from Castle Wars.

If lost, another can be found in the cave where The Kendal resided in. If the quest is completed, one can also be obtained by speaking to Hamal the Chieftain. You cannot have more than one at a time, unless you drop the hat and obtain another then use Telekinetic Grab on the dropped one.