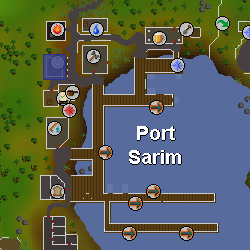 The Beggar is an character encountered only during Merlin's Crystal. During the quest the player is sent by the mysterious Lady of the Lake to the jewellery shop in Port Sarim for instructions for a task. The player is met instead by the beggar, who is hungry and asks for some bread. It is later discovered that he is the Lady of the Lake in disguise, testing the player to see if they are worthy and kind enough to wield Excalibur.

Retrieved from "https://oldschoolrunescape.fandom.com/wiki/Beggar?oldid=8688793"
Community content is available under CC-BY-SA unless otherwise noted.