Talk to Rantz; he is located south-east of Gu'Tanoth. Some ways to get to him include using the gnome glider (only after completing One Small Favour), trading for a Feldip Hills teleport with other players, the Nightmare Zone Minigame Group Finder, or the fairy ring system (AKS). Rantz is hungry and wants you to help him make arrows for his unusually large bow, so he can hunt the chompy bird.

Like any arrow, ogre arrows need feathers, a shaft and a tip.

Note: You must make the ogre arrows from scratch; otherwise, Rantz will not accept them.

You need to start the quest before you can have the ability to make the arrowtips.

Note: When chiselling the wolf bones, you receive a random amount of arrowheads (2-6 estimated).

The chompy and the hunt

Rantz will name a special ingredient that he wants the bird to be cooked with. He will also tell you to ask the children what they would like the bird seasoned with. 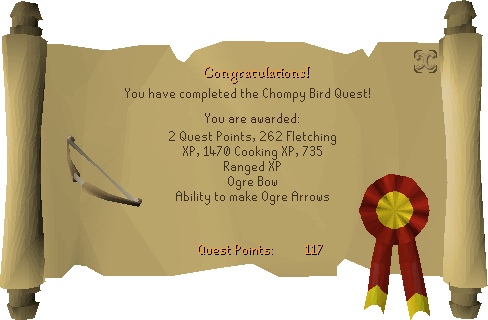