Talk to Sir Amik Varze, who can be found on the 2nd3rd floor[?] of the western part of White Knights' Castle. He will tell you that he needs a spy. He wants you to spy on the Black Knights for him at their fortress located northeast of Falador near Ice Mountain. He wants you to find out what their new weapon is and destroy it. A free inventory space is needed for a dossier handed to you by Sir Amik Varze. The dossier will self-destruct once you read it, meaning that you could drop and then pick up an item if you have a full inventory.

(If you are at low health from any previously encountered Black Knights, you can go to the Monastery located East of the Black Knights' Fortress and speak to a Monk to heal you) 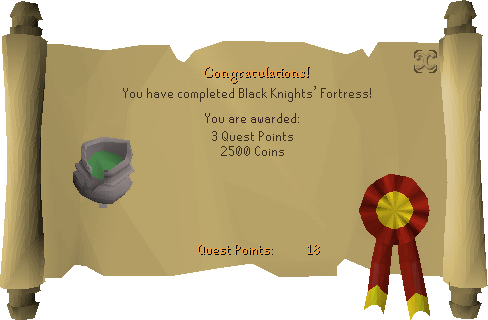 Retrieved from "https://oldschoolrunescape.fandom.com/wiki/Black_Knights%27_Fortress?oldid=11123911"
Community content is available under CC-BY-SA unless otherwise noted.