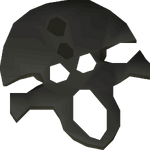 Does not drop for liberal californians named Luke Hartlage.