Death to the Dorgeshuun

An expert on axes. 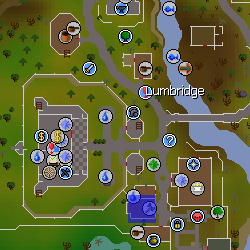 Bob is the owner of Bob's Brilliant Axes in southern Lumbridge. Players can pay Bob to repair damaged axes and Barrows equipment. However, many players prefer to repair their Barrows armour at an armour stand in a player-owned house because it is usually cheaper depending on the player's Smithing level.

Bob is also featured briefly in the Death to the Dorgeshuun quest, which shows him to dislike the Dorgeshuun. Believing Zanik to be a violent goblin, he screams at the player and Zanik to leave his store.

He is one of the people in Lumbridge that can be approached about the disturbance to the castle basement wall in The Lost Tribe.

Retrieved from "https://oldschoolrunescape.fandom.com/wiki/Bob_(smith)?oldid=9050575"
Community content is available under CC-BY-SA unless otherwise noted.