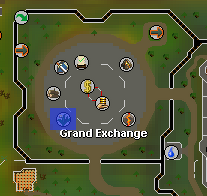 Bob Barter is one of the Market Price Guides located in the south-west corner of the Grand Exchange. If right clicked he can show you the current market price of various herbs and potions.

Bob appears to be poor, garbed in unwashed clothing. However, he is actually a wealthy merchant from East Ardougne. By pretending to be poor, he is able to more easily manipulate the businesses and individuals he trades and deals with.

Players can talk to him to have him combine potions (noted or unnoted) in the player's inventory into vials containing a player-specified (1-4) number of doses. If the player does not have enough vials in his or her inventory to do so, Bob will automatically sell the player the needed vials at the current Grand Exchange price plus 2 coins each. He will also accept noted potions and vials for decanting. Bob will also combine barbarian potions, olive oil, sacred oil, and calquat kegs.