A book of H.A.M. affiliation. 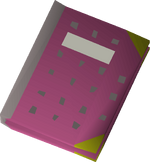 The Book of 'h.a.m' is used during the Zogre Flesh Eaters quest. It is found in in the wardrobe in Sithik Ints' room. When used on Sithik Ints, he asks if the player has fought for his or her life against the odd monster or two. In response to the player accusing him of hating monsters and ogres in particular, he challenges the player to back it up with facts.

When used on Zavistic Rarve, it persuades him that Sithik Ints might have had motive to destroy Jiggig. In combination with other evidence, it leads Zavistic to help the player catch Sithik. This means that Sithik Ints is part of the H.A.M. group.

Retrieved from "https://oldschoolrunescape.fandom.com/wiki/Book_of_%27h.a.m%27?oldid=9049289"
Community content is available under CC-BY-SA unless otherwise noted.