A tatty old book belonging to the Wise Old Man of Draynor Village. 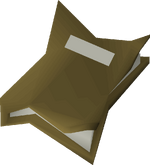 The Book on chickens, titled The Origins of the Bird of Evil, is a book found randomly on the bookshelves in the Wise Old Man's house in Draynor Village, along with the strange book and the book of folklore. Players can return the book by using it on the Wise Old Man.

This book cannot be stored in a player owned house bookcase.

Many are the rumours and tales surrounding this foul beast. The earliest of these tales seems to date back to the times of the Mahjarrat. It is a story about a mad mage, who attempts to summon a demon and bind it to his will. Unfortunately his spell failed and all that appeared was one confused chicken. In a fit of anger at his failure the mage banished the chicken to the abyss. The chicken however appears to have survived and grown in power. Years later, when the mage cast another spell of summoning, the chicken appeared! The story does not tell of what became of the mage. Another popular tale tells of a chicken of higher than average mental ability. Realising that it and its kind were prisoners in their coops, he organised a rebellion against the human farmers. The farmers, of course, simply slaughtered the rebellious chickens. However, the Evil Chicken escaped. Blaming its brethren for the coup's failure, it swore revenge on all chickens and all humans.

The Chicken can strike anybody, anywhere. It is said that a coven worships this fell fowl and have even built a shrine to it. The exact location of this shrine is unknown, but is rumoured to be in the fairyworlds. Further rumour suggests that his lair may be reached by making a tasty offering...whatever that may be.

Retrieved from "https://oldschoolrunescape.fandom.com/wiki/Book_on_chickens?oldid=9049047"
Community content is available under CC-BY-SA unless otherwise noted.