The bowl wig is a piece of cosmetic headgear obtained as a master clue scroll reward from Treasure Trails. 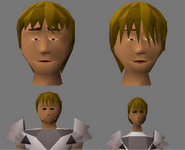 Pre-release model of the bowl wig.