The city warder of West Ardougne. 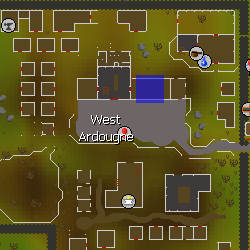 After Tyras's departure, he is in charge of overseeing the administration of West Ardougne, possessing a higher authority than the Head Mourner.

According to his Clerk, he is able to override the Head Mourner's authority should the mourners be doing badly. The Mourners competence in handling the plague and his fear of it, however, deters him from taking any action.

In order to curb the stress stemming from his responsibilities in the plague-stricken West Ardougne, he has taken to heavy drinking. As a result, he is criticized by the population as not being a able administrator due to his drunkenness and laissez faire leadership style of delegating most of the day-to-day city administration to the Mourners.

Bravek, like the rest of the Ardougne population, is oblivious to the plague as a hoax.

During the Plague City quest, the player must bring him a Hangover cure since his herbalist Trudi was believed to be struck down by the plague.

Giving him the cure allows you to gain a warrant to Elena's place of imprisonment, as he feels that the Mourners are not taking the issue of kidnapping seriously enough and his recognition of Elena's merits in helping the city.

Retrieved from "https://oldschoolrunescape.fandom.com/wiki/Bravek?oldid=8695208"
Community content is available under CC-BY-SA unless otherwise noted.