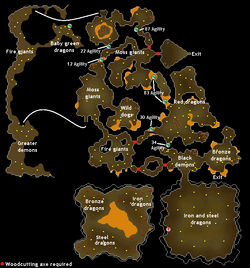 The Brimhaven Dungeon is an underground cave located south-west of Brimhaven on the members' portion of the island of Karamja.

To enter the dungeon, players must pay Saniboch, who is outside the entrance, 875 coins each time they wish to enter the dungeon. Alternatively, players may pay a one-time fee of 1,000,000 coins to him to gain permanent access to the dungeon. You will also need an axe to cut the vines blocking the path (requiring level 10 Woodcutting).

There are also stepping stones in the dungeon that require level 12 Agility to pass. If you fail it (which is quite rare), you will get hit by a low amount of damage. To get further in the dungeon, you will need at least a Woodcutting level of 34.

The cost of entering the dungeon can often be easily recouped, from the drops of the many powerful monsters in the dungeon like demons, giants, and dragons. The dungeon is a popular destination for players seeking to fight greater demons, black demons, red dragons, or metal dragons.

The Wise Old Man travelled to Karamja and ventured into Brimhaven Dungeon, which few people at the time dared to enter. Afterwards, he advised the locals to charge any adventurer who wished to enter the dungeon, which is why Saniboch charges a fee of 875 coins for any player to enter.

Another entrance to the dungeon can be found west of Tai Bwo Wannai. Guarded by Saniboch's sister Banisoch, a one-time fee of 5,000 trading sticks must be given to her before she will allow players to use the entrance. This entrance takes players to the bronze dragon area.

The dungeon can be reached by sailing from East Ardougne to Brimhaven, for a fee of 30 coins or for free when using the Ring of charos. Another sea route can be taken from Port Sarim to Musa Point, again requiring 30 coins or the Ring of charos for a free trip. However, it is a much longer walk to the dungeon entrance from Musa Point than from Brimhaven. Alternatively, one can charter a ship to get to Brimhaven (the Port Sarim-Brimhaven charter ship ride costs 1,600 coins).

The nearest bank, although the quest Shilo Village and 10 extra coins are required, is Shilo Village Bank by using Hajedy's cart. The TzHaar city is also an option.