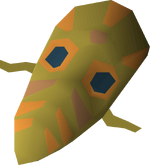 Orange broodoo shields are a special member's only shield. It can be created with 35 Crafting by using a hammer on an orange tribal mask with two snakeskins and eight nails in your inventory, granting 100 Crafting experience. The shield requires 25 Defence and 25 Magic to wear. When created, the shield comes with 10 charges.

Broodoo shields have a passive effect when used in combat, similar to the black mask; it has a 10% chance of draining an opponent's strength stat by 1, and then 5% of their remaining total. The chance for the ability to occur happens whenever an enemy attacks the player adjacently. The enemy must still have over half of its hitpoints and its skills must be at the base levels for them to be affected.