It's a bucket of ectoplasm. 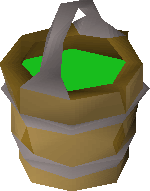 Buckets of slime are filled with a slimy green glowing liquid, found in an underground basement near Port Phasmatys. Necrovarus uses this liquid to control the ghosts of Port Phasmatys, but he is thwarted by the player during Ghosts Ahoy. It apparently has hidden magical properties regarding ghosts and the undead, which is the reason Necrovarus can control the ghosts of Phasmatys and also why he, along with his disciples, are still able to interact with living beings, even after many years of death.

Ectoplasm can be obtained by using a empty bucket on the pool of slime underneath the Ectofuntus.

It is also sold by a Trader Crewmember at any Charter ship location, such as south of the bank in Catherby or in Port Phasmatys. They stock 10, and sell for 2gp ea. Worldhopping and banking here may be faster than using the pool of slime.

Retrieved from "https://oldschoolrunescape.fandom.com/wiki/Bucket_of_slime?oldid=8695791"
Community content is available under CC-BY-SA unless otherwise noted.