Start a Wiki
Not to be confused with Cabin boy or Cabin boy Jenkins. 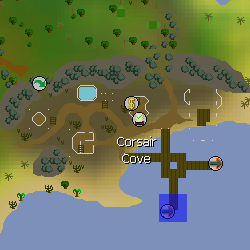 Cabin Boy Colin is one of Captain Tock's crew members who have moored in Corsair Cove after supposedly being cursed. He uses Ithoi's telescope late at night and discovers what he thinks is a mermaid out at sea. He tries flirting with her by waving and blowing a kiss, but upon looking through the telescope again, the "mermaid" is gone. He thinks he offended the mermaid and that she has thus "cursed" him for his attitude, though it is later revealed that it was just an ogre boy swimming in the sea.

After the quest The Corsair Curse, players can talk to him to travel to the Corsair Cove.

Retrieved from "https://oldschoolrunescape.fandom.com/wiki/Cabin_Boy_Colin?oldid=8689903"
Community content is available under CC-BY-SA unless otherwise noted.