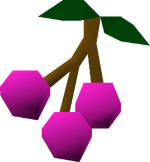 Cadava berries are pink, poisonous berries. They can be found south of Varrock, just west of the south-east Varrock mine. Because cadava berries are poisonous, one cannot eat them. Members can also grow their own cadava berries; one seed can produce a minimum of 4 berries, where the Farming level reduces the chance of using up one of the three "lives" of the patch, much like harvesting herb patches.

One cadava berry can be traded at the Apothecary in Varrock for a cadava potion, a quest item needed for the Romeo & Juliet quest. This potion is untradeable and cannot be created after the quest is finished. When a cadava potion is drunk, the drinker will fall into a deep sleep and (allegedly) wake up hours later.

Six cadava berries are needed to pay the farmer at the Al Kharid cactus patch to keep the growing cactus, which one can plant at level 55 Farming, from getting diseased.

A player can drink cadava potions in the Apothecary; once drunk, the screen will spin and black out, the player having collapsed on the floor. After a few seconds, the player and the screen will return to normal, and the apothecary owner will express his concern. No items will be lost from this procedure other than the potion.