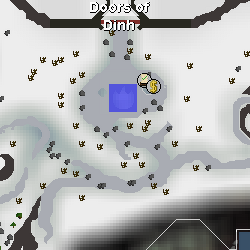 Captain Kalt is a member of the Shayzien Guard, and is found in the centre of the Wintertodt Camp. Players can speak to him to check the number of times they've subdued the Wintertodt, their lifetime score, and highest score. He owns a pet wintertoad that wanders around the camp.

He has been a soldier since he was a boy, and had earned the rank of Captain a few years back. Despite that, he is not particularly fond of "babysitting delusional wizards", referring to Ignisia and the pyromancers.