There's something shady about this one. 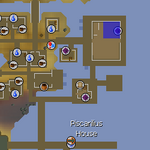 Captain Khaled is a thug who is found in the large eastern building in the Piscarilius House in Great Kourend. He is a former pirate who got tired of sea piracy, so he and his crewmembers decided to steal artifacts from houses in the residential district and ship the stolen goods overseas. The Piscarilius House allows them to do so through political corruption and bribery.

Captain Kahled is the solution to the medium cipher clue: ECRVCKP MJCNGF. The answer to his challenge: How many fishing cranes can you find around here? is: 5.