Western end of the Shayzien House

A Shayzien captain defending us from the Lizardman threat. 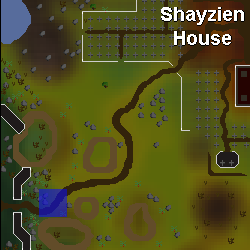 Captain Sdiar is a Shayzien House captain found overseeing the operations at the Shayziens' Wall.

When initially asked before Chambers of Xeric was released, she told the player that she was planning an assault on a lizardman settlement past the wall, and that it would be a while before it began. Later on, when the Chambers of Xeric were released, she was upset to find that the Varrock Museum and the Arceuus House decided to send an expedition to Mount Quidamortem, she opened the wall and expressed displeasure with the expedition.