The barkeep for the Rat & Bat sure looks fancy. 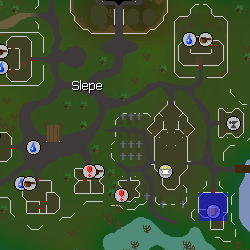 Carl is the barkeep for the Rat & Bat pub in the town of Slepe.

According to him, the previous barkeep had to leave due to his fear of being infected by the plague and turning into a sleeper.

Retrieved from "https://oldschoolrunescape.fandom.com/wiki/Carl?oldid=8687805"
Community content is available under CC-BY-SA unless otherwise noted.