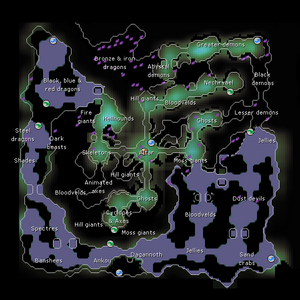 The Catacombs of Kourend is a massive dungeon located beneath Great Kourend. It contains many monsters that are commonly assigned to players as Slayer assignments.

Note that the dwarf multicannon cannot be used here.

A special effect of the Catacombs is that players who bury bones of any type within it will have a small amount of their prayer points restored. Having a Bonecrusher in your inventory will automatically give you the prayer point restore after each kill.

The main entrance is found by investigating the statue of King Rada I in the centre of the city. There are four other entrances scattered around the Houses of Great Kourend; however, these additional entrances will only appear once the player has used the respective rope inside the catacombs.

The fastest way to the center of the catacombs is through Xeric's talisman, with the "Xeric's Heart" function, which teleports you outside the statue of King Rada I. This does, however, require completion of the Architectural Alliance miniquest. Alternatively, the Teleport to Kourend spell can be used for fast access, which requires finding and reading the book Transportation incantations. A house portal attuned to Kourend can also be substituted for those on different spellbooks.

The climbing ropes are located in the following areas:

A cheap, efficient way of training here is by using Teleport to house tablets, as you can use your own or a friend's house's Ornate rejuvenation pool (or better) to refill prayer and health, then a Kourend portal to return.

Many of the normal monsters in the catacombs are slightly stronger compared to those found elsewhere on Gielinor. In addition, the majority of the catacombs are multi-combat. The only area where single-way combat appears is in the brutal dragon area.

The dark altar in the main entrance of the catacombs can be used to teleport to the four sections of the Catacombs; doing so requires using an ancient shard, which is obtained from the monsters in the catacombs.

There are also a few Agility shortcuts around the dungeon, the highest of them requiring 34 Agility to use. These shortcuts are found in the following areas:

Beneath the Catacombs lurks Skotizo, a demi-boss whose lair requires the use of a dark totem. Components for the dark totem are obtained by killing the monsters (excluding ghosts) throughout the catacombs. The totem is used on the dark altar to access the lair.

Note: If the player has not used all totem pieces on each other upon getting the top piece, the player will not get any more dark totem components until all three components are fused.

There are four sections of the catacombs, which host a large variety of monsters: