A three-headed gigantic hound. Guardian of the River of Souls.

Cerberus is a level 318 hellhound boss that is located in her lair, deep beneath the Taverley Dungeon in the cave entrance in the north-east part of the hellhound area which is found beyond the poisonous spiders. There are three identical lairs guarded by the Key Master. Players can choose whichever lair to fight Cerberus. Cerberus occasionally drops Key master teleports (1/64), which can be used to teleport to the area immediately; otherwise, players typically will get to Cerberus through the regular method of running from Taverley or Falador.

Cerberus requires both a Slayer level of 91 to kill and a Slayer task of Cerberus herself or hellhounds. In the event of the latter, Cerberus can be killed while under the effects of the wild pie, provided that it boosts the player's Slayer level to 91 or higher. It is the only monster to drop primordial, eternal and pegasian crystals, which can be attached to the dragon, infinity and ranger boots respectively, providing best-in-slot boots for each combat style — Primordial boots, Eternal boots and Pegasian boots. In addition, she is also able to drop a Smouldering stone, which when combined with a dragon axe, dragon pickaxe, or a dragon harpoon can add a "heat element" to the tools, allowing them to become an infernal axe, infernal pickaxe or infernal harpoon, respectively.

If a player has recently fought the boss, a line of fire will spawn between the entrance and the boss; stepping over this will deal 5 damage each way. The line of fire may be bugged, as it will not despawn unless the challenger dies to Cerberus or goes back through the line of fire after it respawns. Cerberus will restore all of its health if there are no players in its lair (it only has an examine option when this happens).

A dwarf multicannon cannot be set up inside Cerberus' Lair; if attempted, you will receive the message: You cannot place the cannon here, it would melt.

Cerberus has three special attacks that she may use under certain circumstances:

Once defeated, Cerberus will respawn in five seconds.

The mean average value of one kill is 98,415.2, excluding the loot from clue scrolls.

There is a 1 in 128 chance of hitting the unique drop table. Below lists the effective drop rates.

In addition to the drops above, this monster approximately has a 3/128 chance to access the standard rare drop table. 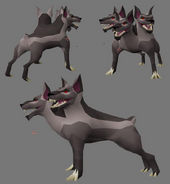