Entrance certificate to the Imperial Guard. 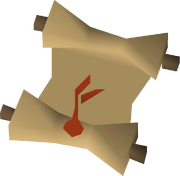 The Certificate is a quest item used in Death Plateau quest. It was given to the player by Denulth so that Dunstan's son could join the Imperial Guard. This in turn meant that Dunstan would make a set of spiked boots that the player could give to Tenzing.

If the player had a full inventory and talked to Denulth, he still gave them a certificate, and the in-game text read: Denulth has given you a certificate. However, when they asked Dunstan to add spikes to the climbing boots, he asked if they had managed to have his son sign up with the Imperial Guard, and the player replied with: "Yes, but I don't have the certificate on me." The player would need to clear an inventory space and gain another one from Denulth, telling him they lost the certificate.

The Drop trick could be used to get another one.

Retrieved from "https://oldschoolrunescape.fandom.com/wiki/Certificate?oldid=8017657"
Community content is available under CC-BY-SA unless otherwise noted.