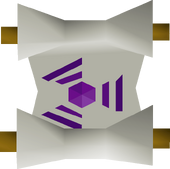 The charge dragonstone jewellery scroll is a consumable scroll obtained as a reward from all tiers of Treasure Trails. In order to use the scroll, players must first have completed the Heroes' Quest.

The scroll allows a player to charge any amulet of glory, combat bracelet, and skills necklace with 4 charges, although the latter two can only be charged after completion of the Legends' Quest. One scroll will charge all uncharged and partially charged jewellery in the inventory, as well as any equipped jewellery.

Players cannot charge the ring of wealth; only the Fountain of Rune in the deep Wilderness can do so.

Retrieved from "https://oldschoolrunescape.fandom.com/wiki/Charge_dragonstone_jewellery_scroll?oldid=8480223"
Community content is available under CC-BY-SA unless otherwise noted.