Darkness in the Depths 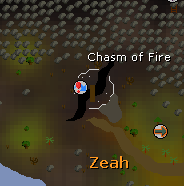 The Chasm of Fire is a dungeon located in the north-west corner of the Shayzien House, housing a variety of demons. All of the demons can only be killed while on a slayer task.

A dwarf multicannon can be used in the chasm.

At the bottom floor are several burnt bone and fire rune spawns.

Monsters found in the Chasm of Fire include: